skip to main | skip to sidebar
I've finished the first issue of Dust, a comic series I wrote and illustrated! It also features the amazing colors of Monico Chavez, and was edited/lettered by the wonderful Pancha Diaz!

Here is the book's cover: 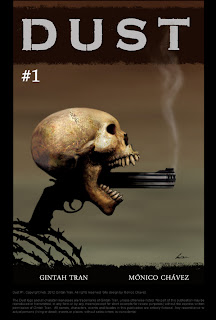 Dust is a character-driven survival set after the fall of human civilization. The book follows a group of humans as they grapple with issues of identity, sustainability and ethics. The world is populated by warring tribes of human survivors, ferocious cannibals, vampires and tough female characters who don't dress like prostitutes!

If you're a fan of horror, post-apocalyptic fiction, vampires, action, or just good stories, please check out www.dustcomic.com to learn more!


Posted by Gintah Tran No comments:

I've just finished painting six posters for the SF Olympians Festival, a twelve-night festival of  plays inspired by Greek deities. Here are the pieces, accompanied by the brief summaries I based the images upon.
ICARUS 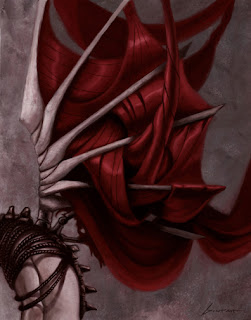 In this tale of two Icaruses-one mythical, on actual-the sky is (quite literally) the limit. Written by Jeremy Cole.
HESPERUS 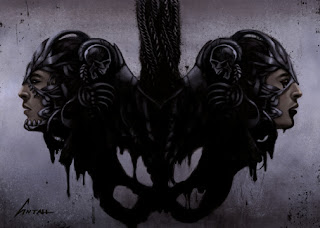 A cease fire holds, but only nearly, between heaven and hell. Hesperus and Phosphorus, representatives of the God and the Devil sit across from each other and discuss the neutral zone between good and evil. One wrong word could bring an end to the cease fire. Written by Claire Rice.
PHAETON 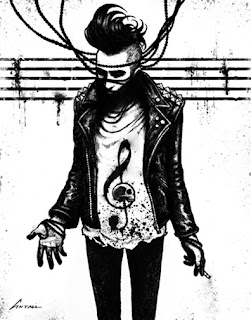 Tortured by talent, the reality of time passing, and the need to be forever remembered, steer this story of Phaeton; a one act about a boy trying to find his place among the stars. Written by Ashley Cowan.
ZEPHYRUS 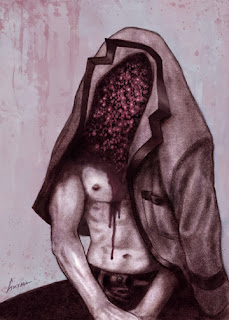 A love triangle and sibling rivalry lurk the halls of a 1920's British university with dangerous results, in a story of unrequited love, taboo homosexuality, scheming and revenge. Written by Neil Higgins.
EOSPHOSPHOROUS 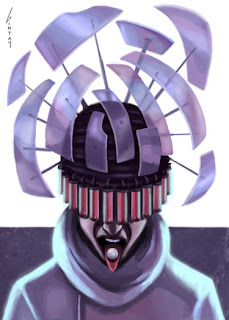 You’re a god that lives on Venus, a scientist. You’re banished to Venus and confined your lab. And the one thing that gets you, that incessantly tweaks your dental nerves, is that the damn plant won’t grow.
But it’s not a plant, it’s a whole planet.
Written by Sean Kelly 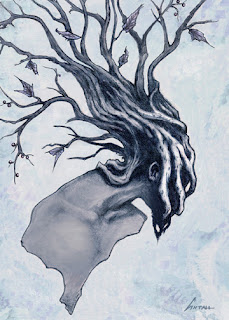 In Hard Pack, the rivalry between partners of a snowplow dealership in the snowy Northeast reaches epic proportions. Written by Lise Catherine Miller.
Posted by Gintah Tran 2 comments:

Website's finally up at Gintah.com 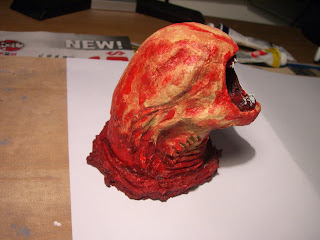 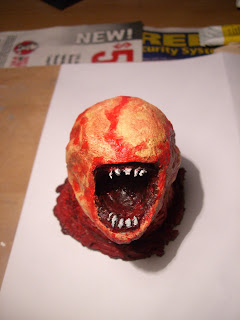 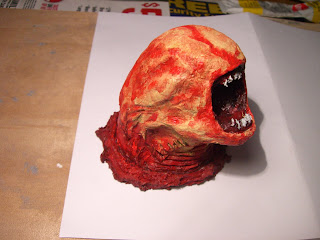 Here's an alien chestburster I sculpted for my Halloween costume. I used CelluClay, which comes in a block of fiber/powder that you mix with water until it becomes clay. When dry, it's lightweight and feels like papier-mache, and you can paint directly on top of it. Thanks to the guy at Pearl for recommending it. Pretty neat stuff! I finished this little fella off with acrylic.
Posted by Gintah Tran 1 comment: 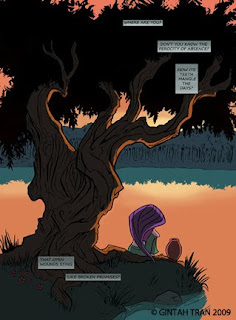 My comic is finally out! I've written and illustrated "river" a 17 page story for Siren, a comics anthology which debuted at the Alternative Press Expo this year. It features15 stories, by different artists in varying genres and styles, all dealing with the themes of luring and capturing.

I've posted a sample page. You can see more and order at www.sirencomic.com

Please check it out!
Posted by Gintah Tran 1 comment: 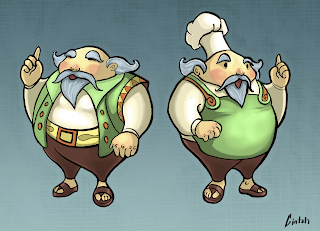 These were done for a Vietnamese pho restaurant called Papaya, located at the Renton Highlands center in Renton, Washington. They wanted something to set them apart and hired me to develop a fun concept and company brand.

They had no ideas in terms of a concept, other than the story be whimsical and cute. Our first meeting was in a Chinese noodle house near San Francisco. As we were leaving, I said "how about two little girls and their grandfather, who own a magic pho stand? The grandfather could be a powerful wizard who got tired of the wizardly existence and decided to fulfill his life's dream of becoming a cook. But his grandaughters, curious and entranced by his erstwhile profession, end up getting into all sorts of magic related mischief.

This way, the story was cute, fun, and fit thematically with the restaurant. They loved the concept and later I added three little sidekick characters-a hot tempered chilli sauce bottle, a sweet and loving Hoisin sauce bottle, and a flying sticky bun with a top hat.

Here is the art in the restaurant, which just opened last month: 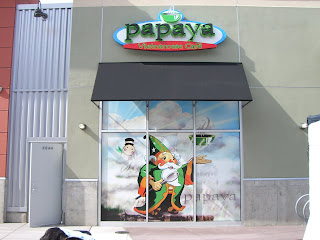 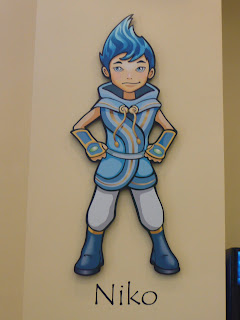 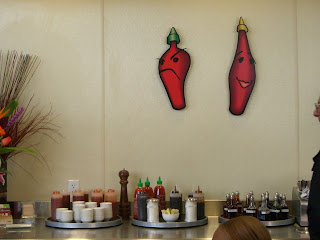 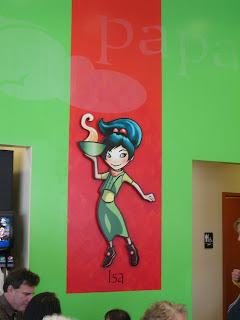 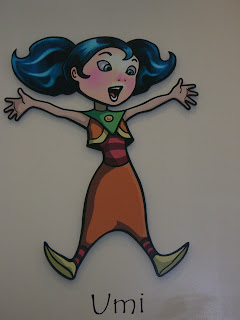 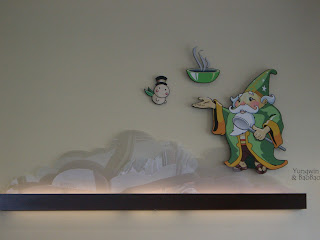 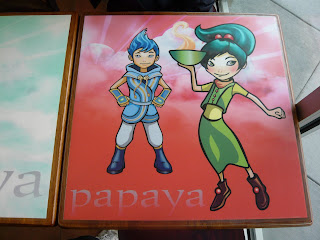 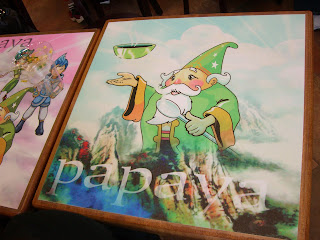 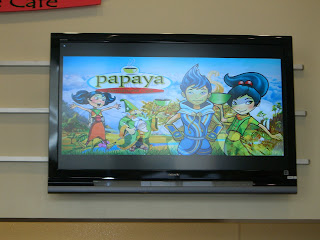 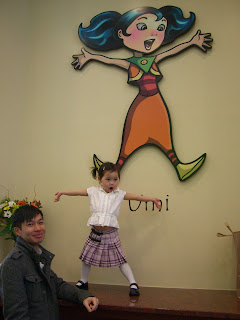 This is one of the owners' daughters, whom the character is named after. Her mom says she requests her hair in pigtails every day, to match her cartoon counterpart. Cute!

Whew, that was exhausting!

So my little sister is organizing a hip hop dance competition at her University. They're planning to sell t-shirts at the event and she's unhappy with the designs provided by the printing company. So she calls me up and asks if I could design one for her, and if I could finish it by ummm....oh tomorrow at 9 AM.

So here it is. Nothing fantastic. Concept, sketches, revisions, and final done in about a day. Whew. I better be getting a really good birthday gift this year!
Posted by Gintah Tran 2 comments: